Lecture Series: From the Universe to Lusatia 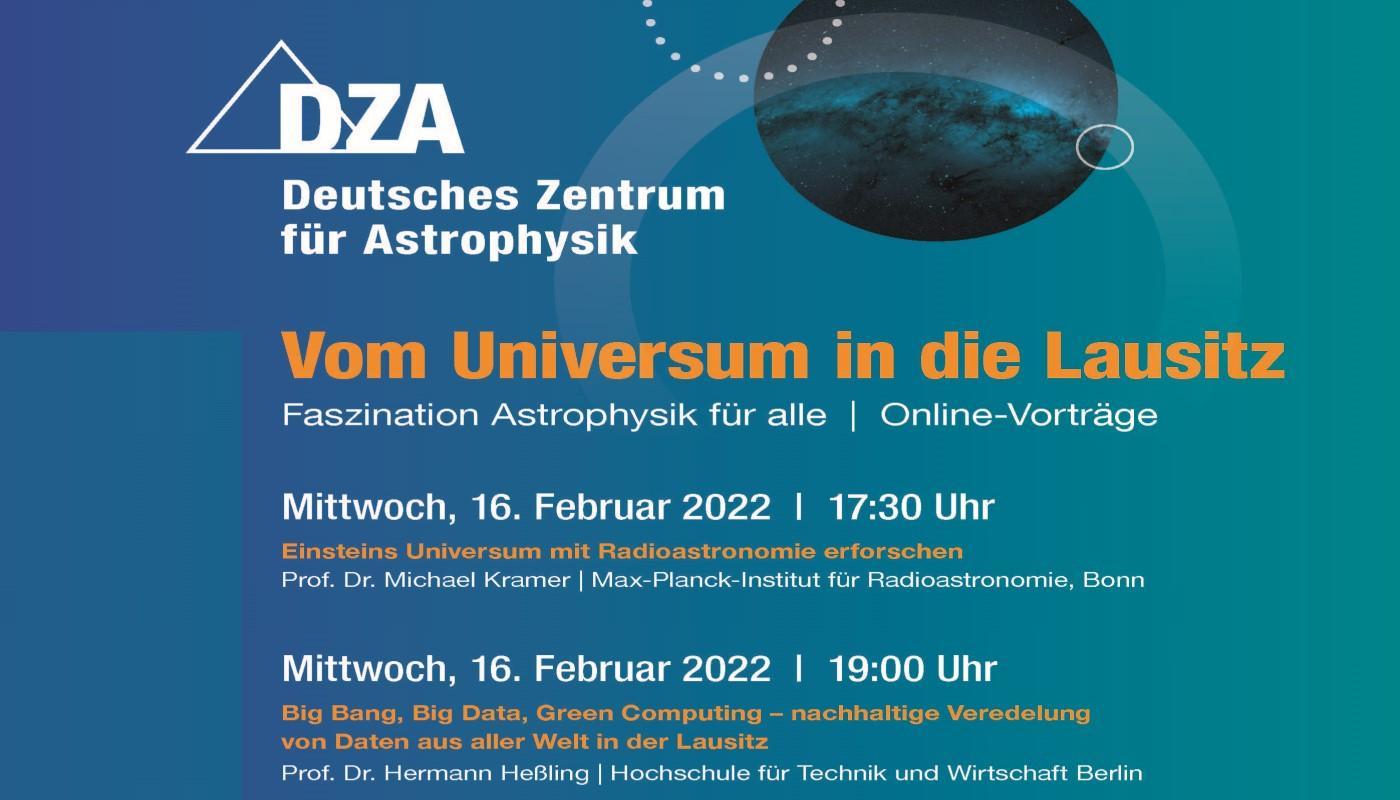 Fascination astrophysics for all: On February 16 and 17, 2022, the DZA team invites you to two evenings full of exciting insights into the world of physics and ideas for the German Center for Astrophysics (DZA) with online lectures. You can listen to and watch all the talks afterwards here.

More information about the topics and speakers:

The universe holds many secrets that astronomy is trying to unravel. In addition to stars and galaxies, there are countless objects that we cannot see with our eyes but that we can observe with telescopes, especially radio telescopes. Whether they are images of black holes or regular signals from the densest objects in the universe, neutron stars or waves in space-time, radio astronomy tracks them down and compares the results with the predictions of Albert Einstein's general theory of relativity. A deviation from Einstein's predictions would be a (further!) revolution of our world view. This talk reports on the search for such deviations.

Prof. Dr. Michael Kramer is Director at the Max Planck Institute for Radio Astronomy in Bonn, Professor of Astrophysics at the University of Manchester and President of the German Astronomical Society. His research focuses on neutron stars, black holes and gravitational waves. He was one of the key players in the first recording of a black hole and specializes in precise experiments to test Einstein's theory of relativity using radio astronomy.

Big Bang, Big Data, Green Computing - sustainable refinement of data from all over the world in Lusatia

"Data" are one of the three supporting pillars of the German Center for Astrophysics (DZA): Data streams from various astronomical observatories around the globe are to be combined. The amount of data they produce exceeds the volume of the entire worldwide Internet traffic. Of the future flood of data, only a fraction can be stored in the long term. It is therefore important to extract the really relevant information from the huge data streams in the shortest possible time. Decisions about what to discard are irreversible - what's gone is gone. To make sure they are the right decisions, we need new machine learning techniques. Otherwise, we face a dramatic loss of information. Even outside astrophysics, more and more sensors are being used with ever higher resolution and ever greater connectivity. For example, in personalized medical care or traffic control, the amount of data is also growing enormously. The DZA is an ideal place to develop the novel computational methods needed for this. Experience shows that many start-ups are created in the vicinity of data-intensive facilities: As job engines, they make a decisive contribution to the sustainable development of the local economy.

Hermann Heßling studied physics at the universities of Münster, Göttingen and Hamburg. After earning his doctorate, he went to the German Electron Synchrotron DESY in 1993. Since 2000, he has been a professor of applied computer science at the Berlin University of Applied Sciences (HTW). He is particularly concerned with Big Data and its analysis in real time.

My God, it's full of stars - galactic archeology
with two billion stars

Prof. Dr. Matthias Steinmetz | Professor of Astrophysics at the University of Potsdam and Director at the Leibniz Institute for Astrophysics Potsdam (AIP)

The Milky Way is our home galaxy. Together with the sun, about 100 billion stars of different ages orbit around the galactic center. The Milky Way is a typical representative of a whole class of galaxies, the so-called spiral galaxies, as they occur many billions of times in the universe. But how did our galaxy form? Did it form in a violent "primordial collapse" 10 billion years ago or did it form slowly through the successive mergers of smaller galaxies, as cosmology predicts? If the latter is the case, there should be remnants testifying to such galactic collisions. But these remnants have been washed out almost beyond recognition over billions of years. However, recent large-scale projects from the ground and from space make it possible to systematically analyze the properties of millions of stars in our Milky Way, to detect these remnants, and thus to reconstruct the history of the formation of our Milky Way.

Matthias Steinmetz is Scientific Director of the Leibniz Institute for Astrophysics Potsdam (AIP), Director of the Research Area Extragalactic Astrophysics and Professor of Astrophysics at the University of Potsdam. His research interests focus on the formation and evolution of galaxies, especially our Milky Way. To this end, he is involved in projects on high-resolution simulations of galaxy formation as well as large observational campaigns. He is Principal Investigator (PI) of the RAdial Velocity Experiment RAVE, a large international observational collaboration that has collected over half a million spectra of stars in our Milky Way over the past decade.

Gravitational waves - a new window into the universe

Since the first direct detection of gravitational waves in 2015, our knowledge of the universe has been enriched by a completely new window of observation - we can now not only observe the universe with electromagnetic telescopes and neutrino detectors, but also virtually eavesdrop on it with interferometric gravitational wave detectors. The sensitivity of these detectors is now so high that quantum effects of the laser light used play only a limited role. This talk describes what astrophysical insights have already been gained in the last 6.5 years, highlights the limiting noise sources of the current and next generation of detectors, and gives an outlook on the future of gravitational wave detection.

Michèle Heurs is a professor of experimental physics at Leibniz Universität Hannover (LUH). She works in the field of non-classical laser interferometry and quantum control, both in fundamental research (gravitational wave detection and quantum optics) and in applications in precision metrology. Michèle Heurs is a long-time member of the LIGO Scientific Collaboration (LSC) and has been a council member of the LSC since 2015. She is Dean of the QUEST Leibniz Research School (an interdisciplinary faculty of LUH) and Principle Investigator in the Clusters of Excellence "PhoenixD" and "QuantumFrontiers".

The Gaia Space Telescope and the Measurement of the Universe

Prof. Dr. Sergei Klioner | Head of the Lohrmann Observatory at the TU Dresden

For more than 20 years, a group of scientists from the Lohrmann Observatory at Dresden University of Technology has been involved in one of the most fascinating astronomical projects - the Gaia space telescope. ESA's Gaia mission was launched in December 2013 and measures the positions of about 2 billion celestial bodies (mainly stars) so precisely that the smallest changes in position provide information about the distance of these celestial objects as well as their spatial motion. Both the accuracy of Gaia's measurements and the number of objects detected are creating a true revolution in astronomy. Applications of the Gaia results range from more precise determination of asteroid orbits in the solar system, to new insights into the physics of stars and the dynamics of our galaxy, to the physics of quasars - distant galaxies that provide the reference frame for Gaia. The talk will discuss details of the Gaia project and examples of the scientific results.

Prof. Dr. Sergei Klioner is director of the Lohrmann Observatory at the TU Dresden. His research areas are astrometry, celestial mechanics, and the astronomical applications of relativity. He has been involved in the ESA Gaia project since 2000. As a member of the Gaia Scientific Board (since 2007), Prof. Klioner is jointly responsible for the optimal processing of Gaia data.

We are standing in the rain. Constantly. A constant shower of subatomic, high-energy particles is raining down on the earth from space. Some of these particles have the energy of a tennis ball flying at 200 kilometers per hour. Are they the remnants of violent stellar explosions or the environment of black holes that accelerate them to enormous energies? And what influence do these particles have on our universe? For more than a hundred years, scientists from all over the world have been searching for answers to these questions. Prof. Dr. Christian Stegmann is one of them. Join us on a journey into the world of astroparticle physics.

Christian Stegmann is Director of Astroparticle Physics at DESY, Professor at the University of Potsdam and Head of DESY's Zeuthen site in Brandenburg. His research focus is ground-based gamma-ray astronomy with a focus on high-energy gamma-ray sources in our Milky Way.